Kelly Dore is the Director of the National Human Trafficking Survivor Coalition and Legislative Liaison for United Against Slavery. In that capacity, she has become a powerful voice across the country advocating for a crackdown on human trafficking in all its forms. She is tireless in pursuit of that goal; taking her message to the United Nations, the Vatican, political halls of power, and local human trafficking task force groups.

She is most powerfully driven by the desire to advocate and design policy on behalf of children caught up in the nightmare of human trafficking—and is keenly effective, because their story is her story.

Kelly was born into violence.

Her biological father, 21 at the time of her birth, had a serious grudge against women. That hatred fueled his abuse of her mother—and eventually, of her. Just as she was turning one, her father began to physically and sexually abuse her. Over time, he allowed his acquaintances to abuse her as well. Those illicit encounters became “their secret.”

He covered his tracks—using grooming techniques—telling her this was a way to show him her love, that it was something all little girls did. He also used threats—telling her if she talked, he would kill her mother, brother and (maternal) grandparents. He twisted the truth—telling her she would go to jail for doing “dirty things,” that her mom and family would be ashamed to know her if they knew how bad she was.

Looking at Kelly as a young girl, no one would have known the force, fraud and coercion she lived with. She went to school, pulled excellent grades, excelled at sports. But under that cool facade, a burning discomfort was growing—with what her father was telling her, what he was doing to her, and what he was forcing her to do with others. She decided to share what was happening to her—in the ways she was capable of at the time—with several adults. But no one intervened; nothing changed

A CRACK IN HER STORY

At 13, Kelly found herself in a middle school health class that would begin her journey out of the abuse she had been living in for more than a decade.

Up to that point, Kelly assumed all of her friends were doing things like she was doing at home; but they just didn’t talk about it. As the teacher led a discussion about incest, rape and abuse, that idea began to unravel. So did she.

She saw her classmates jeering at the subject matter, saying how disgusted they were at the very thought of incest. In that moment, Kelly realized she was alone with her secret. Her experience was not normal—and definitely not the experience of her friends. Immediately, she felt ashamed.

She also felt very deep and highly conflicted emotions—a sense of rage at her family, but also an urgent sense to protect them. Like many familial trafficking victims, Kelly’s family ties were strong, controlling. She, like many other victims, unintentionally protected those who hurt her, in large part because she didn’t know how to process what was being done to her and it was somewhat normalized in her family environment. In many ways, Kelly hadn’t seen herself as a victim.

But that day, that conversation, those questions—they not only put a crack in the story her father had told her, but also in the story she had told herself. And pain rushed in through it—deep and overwhelming. She went home and tried to take her life. She lived, but the pain did, too—and caused her to fall into a deep depression.

Finally, a middle school teacher and a counselor took notice.


IN SEARCH OF JUSTICE

Two years after that health class, with solid and consistent support, Kelly eventually found the courage and the tools to seek justice for the wrongs that had been done to her. At just 15 years old, she spoke out, went to court, and testified against her biological father.

“The state brought 27 counts against him. He pled guilty to 19—but he did not have to pay restitution or register as a sex offender. He served only two months in prison for crimes that began around my first birthday and continued until I was 14.”

She remembers what it felt like to be in that courtroom—to testify, to face the horrors again, “to feel like giving up, to feel as if no one wanted to help.”

Roughly 30 years after she took the stand in that courtroom, she finds solace in knowing much has changed. Today, there are better policies and perspectives in place that allow us to believe survivors and prosecute perpetrators. There is a better—and growing—understanding of child sex trafficking and the mechanisms of force, fraud and coercion that drive it.

“The judge was not informed on child abuse, and there was no terminology for human trafficking. But today, more people know about it and can identify it. Many people didn't help me because they did not know how to see my pain. I realize now that they didn’t understand what was in front of them, and I can not fault people for not acting on what they did not know.”

From that realization, Kelly has committed herself to addressing the vulnerabilities minors face when they don’t have a safe or stable home environment, as well as other risk factors that lead to their abuse and exploitation. After her experience, she doesn’t entirely trust the system; so, she is building protections for trafficking victims herself.

Out of her abuse, Kelly saw many survivors not being “heard,” but being discounted or marginalized because of their experience. She refused to stand by while victims were being re-victimized.

She refuses to be defined by her experience, but instead leverages it—with her smarts, connections and passion.

“I believe that we are shaped by the experiences we endure, good and bad. My experience was less than desirable…  As I became older, I realized that there was an opportunity to educate and advocate on behalf of minor sex trafficking victims in a system that did not quite grasp the concept of trauma- informed response.

As long as humans have been in existence, there has always been a demand to use someone for profit, product or pleasure. This is what we need to focus on. This is how we change cultures.”

To those ends, Kelly has drawn upon—and shared—her personal journey while working with advocates, faith-based groups, local task forces, as well as lawmakers at the national level and in Colorado where she lives. She has called for greater prosecution for those who buy children for sex.

“We will never end this modern-day scourge without holding the buyers accountable for the choices they make. In most cases, the buyers have little or no accountability under the law and this is why pimps and traffickers are able to skirt the system. Survivors see this and there is a large distrust for the system and its effectiveness. We cannot pretend to change the level of sexual abuse and rape that occurs amongst children when minors are being held accountable for things adults do to them.”

THE FUTURE AS SHE SEES IT—AND IS MAKING IT

Despite the years of unspeakable abuse she endured, Kelly lives her life free of malice, cynicism and emotional pain. She, instead, cultivates a can-do attitude, leverages her no-nonsense smarts and strategic thinking skills to make “the world a better, happier place.” She does all this while running after her four thriving, highly-active teenagers, in lock step with her husband who is one of her strongest supporters.

Kelly has advanced awareness and implementation of survivor-focused, trauma-informed care for human trafficking victims through her Survivors Coalition; as a county commissioner; by utilizing her social work degree to counsel others; but maybe most powerfully, as a national spokeswoman on the issue.

“One of the biggest empowerment tools I have is my voice. I would be remiss if I did not use it to support other survivors who feel they do not have one. For years, no one heard my voice—and I made a promise to myself that one day, when someone finally did listen, I would not only not stop talking, but I would work to fight for every innocent child—always with the hope that just one might be found and protected from experiencing horrific things.”

Today, the world is listening to Kelly Dore—and beginning to take meaningful action. 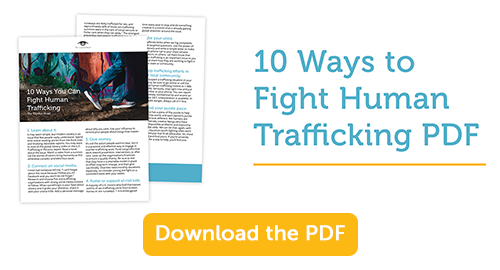 Away From Home: Cindy's Story

The Table: Our Welcoming, Strategic Approach to Fighting Human Trafficking